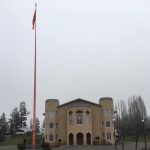 A Gurdwara, meaning the Gateway to the Guru, is the place of worship for Sikhs, the followers of Sikhism. This is a place where the Guru Granth Sahib is installed and treated with due respect according to the Sikh code of conduct and convention.

The main functions that are carried out in all public gurdwaras on a daily basis include:

◾Shabad Kirtan: which is the singing of hymns from the Guru Granth Sahib

◾Paath: which is religious discourse and reading of Gurbani from the Guru Granth Sahib, with its explanations

◾Sangat and Pangat, a free community kitchen as a langar for all visitors, irrespective of religious, regional, cultural, racial, caste or class affiliations.

GURU GRANTH SAHIB
Along with these main functions, the gurudwaras around the world also serve the Sikh community in many other ways including, libraries of Sikh literature, schools to teach children Gurmukhi (Sikh script), the Sikh scriptures and charitable work in the wider community on behalf of Sikhs. There are no idols, statues, or religious pictures in a gurudwara, but the essential feature of a gurdwara is the presiding presence of the holy book and the eternal Sikh Guru, the Guru Granth Sahib.[2] The Sikhs hold high respect for the teachings and commandments laid down in the Guru Granth Sahib.